If you are interested in purchasing green crabs and other seafood here are a few contacts. I am only passing the information and I do not receive any commission for posting this. This list will be updated as I have more contacts.

Chris Jamison, Maine. Please contact Chris at 207-776-3864 or email at csjamison@comcast.net for any type of green crabs (depending on the season) and lobsters.

No Fly Zone Fishing, East Dennis, Massachusetts. They sell green crab in bulk to wholesale distributors and buyers. Please contact them at 508-454-2229. Website is www.noflyzonefishing.com Rimrack Fish, Rye, New Hampshire. Please email fv.rimrack@gmail.com to check on the availability of scallops and to place an order. Sorry, they do not sell squid directly to the customers.

Hủ tiếu (Teochew noodle soup) is a popular noodle dish found in Soc Trang and other Mekong Delta region of Vietnam. Similar noodle dishes can be found in other Southeast Asian countries such as Cambodia and Singapore where there are large communities of Teochew descendants. In my family, we eat this soup at any meal and any day of the week. It can be eaten dried or wet. The dried noodles are cooked, seasoned, placed in a bowl and served with a smaller bowl of hot broth next to it. The wet soup (as seen in this recipe) is eaten with the broth poured over the entire contents in the bowl and served hot.

For this recipe, I used what I have available. I made my umami broth using a mixture of green crabs and a turkey carcass, salted daikon, fresh daikon, and carrot. The toppings consisted of fried tofu, blanched watercress, mushrooms, boiled peeled whole shrimp, bean sprouts, cilantro, scallions, and fried shallots.

I purchased the fresh noodles from Lo's Seafood and Oriental Market in New Hampshire. It is a Hong Kong-style wonton noodle (thick type), each container makes 4 bowls. These noodles taste just like the ones I remember eating in Soc Trang, Vietnam.

Dip the small batch of noodles in hot water for about 10-15 seconds. Rinse with water to remove some of the starch. Strain and add to a large bowl. Garnish with 2-3 tofu slices, 2-3 shrimps, some watercress, mushrooms, and bean sprouts. Ladle the hot broth over the bowl. Remove some broth and return it into the pot and add more new hot broth back into the bowl. This will keep the contents in the bowl hot. Garnish with cilantro, scallions and fried shallots. Serve the bowl with extra fish sauce, some lime wedges, and chili peppers.

Heat the entire contents minus the fish sauce in a large pot, partially cover. Once the liquid comes to a boil, turn the heat down to a simmer for about 1 1/2 hour. Strain and save the broth. Season the strained broth with fish sauce.

This scallop ceviche is my first green crab dish for 2020! I wonder if this is a sign that I will be eating more of these creatures for the rest of the year! The sea scallops were previously frozen (harvested by my local fisherman, Mike Anderson). I made the salted green crab roe, pickled the kelp (the kelp was grown by Catherine Puckett of Block Island) and grew the microgreens in my kitchen. Since the salted roe has enough salt you may want to omit the salt.

This dish does not need a recipe. You just need to add your ingredients (use whatever you have available or desire), squeeze some fresh lime or lemon wedges and enjoy! It is simple, fun to make and so delicious. The only thing I would comment on is that any raw seafood you use must be very fresh and that there is no cross-contamination with freshwater fish or poor handling. My scallops came from a local fisherman, sealed well using a food saver and kept them in the freezer. So far these are the only scallops that I trust to consume raw.

If you are pregnant, immunocompromised or have any health issues or unsure of your health conditions you may want to consult your health care providers before eating any raw or partially cooked seafood.

Cook the salted green crabs for about 5-7 minutes and remove the roe and set aside. Add scallops, kelp, scallions, cilantro, microgreens, and roe. Season with sriracha sauce, lime or lemon juice, oil, and salt. Gently mix and adjust the seasoning as needed.
at January 18, 2020 No comments:

This pickled kelp is useful for many dishes. You can adjust the sugar and vinegar according to your taste. I normally would add a little salt to my pickles but since the kelp has some natural salt I omit it. You may blanch the kelp for 10-15 seconds for a brighter green color if interested.

Simmer the water, vinegar, and sugar for about 5 minutes. Let cool and pour over the kelp. This will be ready to eat within 48-72 hours.
at January 18, 2020 No comments:

Wishing you and your family a Happy and Healthy New Year!!
--from Green Crab Cafe-- 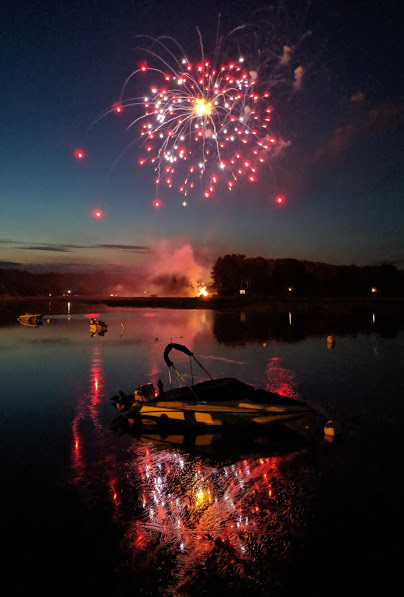 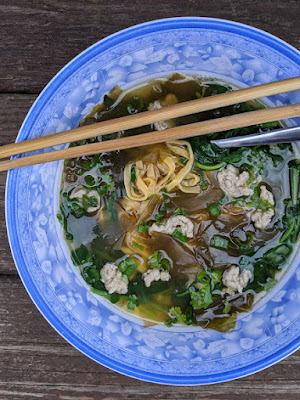