Dr. Bradt gave me 5 crabs that recently molted in her lab. I kept them alive overnight in the refrigerator and made 2 sandwiches with them. Later in the afternoon I went to the coast and helped capture and survey the green crabs with 3 University of New Hampshire representatives and a group of about 10 other citizen scientists. In the end I came home with all the crabs! Luckily, there were a fair amount of soft-shell crabs but most were small. From what scientists have learned it is the ones less than an inch are causing the most destruction, eating up the baby soft-shell clams.

"Bánh mì" is a Vietnamese word for bread but it can also mean sandwich or sandwiches. In Sóc Trăng, Vietnam sandwiches are made using a few different types of fillings. I grew up eating the classic bánh mì thịt (meat) or bánh mì síu mại (dumplings). The meat could be xá xíu (Chinese barbecued pork) or heo quay (Chinese roast pork from a whole roast pig). When I was a child living in Vietnam, my mother, who is a jack-of-all-trades, had a portable cart where she sold bánh mì xá xíu. She marinaded the meat and grilled it over charcoal for a delicious and very fragrant bánh mì filling. I remember her bánh mì were perfectly made and delicious. She also drizzled a special seasoned bean sauce known in Vietnamese as "nước tương". To this day I can still remember this particular sauce. For years I returned to Vietnam to visit my late grandmother and often purchased bánh mì thịt, made with the roast pork from a young woman named Nhạn. Her husband roasts whole pigs and she sells the sandwiches in the afternoon after working in the market selling a variety of pork products in the morning. She also uses the same bean sauce that I remember from my mother's bánh mì. For my crab sandwiches I drizzle this sauce over them to recreate the Sóc Trăng style bánh mì that reminds me of my childhood and mother's comfort food. I have not eaten any bánh mì with this sauce outside my home anywhere else in the US. It is not necessary to use the Green Crab Golden Pâté in the bánh mì. Pâté is not typically added in the sandwiches in the part of Vietnam where I came from. The pâté is commonly used in the sandwiches I find in the US, mixed with cold cuts as the filling.

Prepare all of your ingredients ahead of time except for frying the crabs and reviving the baguette (French Bread) to make it crispy and crunchy. Wash and dry all the herbs and vegetables and put them in the refrigerator so they will stay fresh. Once you have the last 2 ingredients then you can quickly assemble the bánh mì. You can invite a few friends and let everyone assemble their own sandwiches! This way you can encourage your friends to eat more green crabs!

Use home-made or store-bought baguette. Spray the top of the baguette with a little water, place it in a preheated oven at 375 degrees for about 7-8 minutes or until it is a little firm to touch. This will make your baguette extra crispy and fresh. I recently learned this trick of spraying water on the bread to make it crispy and crunchy from Cheryl, co-owner of Forty Five Market Street Bakery and Cafe in Somersworth, New Hampshire.

You can be creative and make it however you prefer. For this post I make 2 types. One is a traditional type where all the stuffing is in the middle. The other type is an appetizer, open-face style. I use either cilantro or sea asparagus on the appetizers but not both--more for visual presentation.

For the traditional ones I cut approximately two 6-inch and three 2 1/2-inch pieces of the bread. Slice the bread lengthwise about 3/4 of the way leaving a hinge. Spread a few spoonfuls of the Green Crab Golden Pate on each side, place a few slices of cucumber on one side, place 2-3 (depending on the size of the crabs) Fried Soft-Shell Green Crabs in the middle, stuff with Vietnamese Pickled Vegetables (Do Chua), onion and cilantro and drizzle with the Seasoned Black Bean Sauce (Nuoc Tuong) and Sriracha sauce or hot chili pepper slices if interested.


For the appetizers, open-face I slice the baguette into fourteen 1/4 inch thick pieces, lightly toasted to crisp them. Spread the Green Crab Golden Pâté.  Next I layer on 1-2 slices of cucumber, a few sticks of Vietnamese Pickled Vegetables (Do Chua), a few slices of onion, either a few cilantro leaves or few sprigs of blanched sea asparagus, 1-3 crabs depending on the crab size and drizzle with the Seasoned Black Bean Sauce (Nuoc Tuong). I only drizzle half of the appetizers with sriracha sauce.

I harvested this vegetable known as sea asparagus or salicornia while searching for the green crabs. I first ate them on Maui where they are referred to as sea asparagus. Later I discovered them growing in salt marshes and near the shore in New Hampshire. They are delicious with a slight saltiness. I like to blanch them for about 20 seconds before eating.
at June 19, 2018

leek and green crab soup   I love eating leek and potato soup. However, this is without the potato and it is equally tasty. If this soup is ... 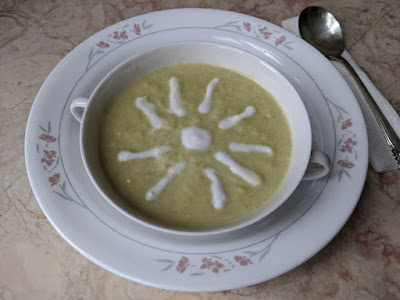